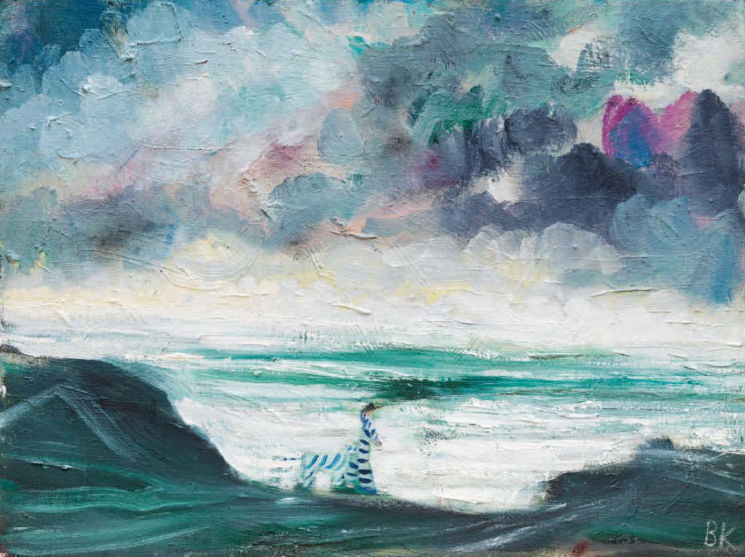 Wow! Ben Kelly’s paintings hit you right between the eyes. There is nothing reticent about this work, nothing delicate, nothing faint hearted.

Here is an artist of boldness and imagination producing paintings of other worldly enchantment. But we can still associate with them as they are essentially about light and its play on everyday scenes – coastal scapes with people and their dogs, enchanted forests with twisting branches beneath shafts of light, layer upon layer of paint, and all with their own narrative – he has his own visual language. Ben is an artist who does nothing by halves – humorous, potent, exciting, surreal and quite extraordinary.

Visit Brian Sinfield Gallery in Burford to see the Ben Kelly exhibition from 8 March to 21 March 2020.

You will notice that in this exhibition, ‘From Coast to Country’ Ben has introduced a border on some of his paintings.   He explains, “Stripes and spots are patterns I often use within my work, the edging relates to the place, object or person within the narratives. I do this from time to time when I feel it’s appropriate and my intention is for them to reflect the painting within.  An edge of Cornish blue by the Atlantic, my Breton stripes by the coast, and striped awnings and beach umbrellas on the continent.”

In contrast to his explosions of colour, Ben’s coastal scenes have a more reflective feel with lone or two figures standing at the edge of the land looking out to sea or walking the coastal paths with their canine friends. What can we say – we love them!

Ben trained at London’s renowned Central St Martins College and despite his great success as an artist he still works as a senior art lecturer at his local university.  Bill Clark from Clark Art says of Ben’s work, “Ben is undoubtedly one of the rising stars of Northern Art and I think he’s going to gain National importance.”

In 2006 Ben Kelly won the Football in the Arts Prize for his painting ‘The Final Whistle’, then the second largest arts prize in the UK.  Only one other painter has won the prize, L.S. Lowry in 1968 for this painting ‘Going to the Match’.

Dr Rina Arya writes: “Ben Kelly takes the viewer on a journey of epic proportions where we are able to sample the delights of different scenic views as the mood takes us. In the kaleidoscope of atmosphere, we are taken from the sombreness of a wintery scene, in contemplation either with a companion or left with one’s own thoughts, to a calypso sun-drenched holiday scene. Kelly has a gift for transporting the viewer from one vision to another. The horizontal bands of the more Nordic works instil a serenity that is shaken up by the fractured vertical shards of the light of warmer climes. Through his vibrant brushwork and customised colour palette he creates a tableau that is highly evocative. A personalised touch is the edging motif that surrounds some works, used to reference a feature in the painting, thereby grounding a sense of place.”

Dr Rina Arya is an art theorist and one of the foremost scholars on Francis Bacon. She has published several books on the artist.

Visit Brian Sinfield Gallery in Burford to see the Ben Kelly exhibition from 8 March to 21 March 2020.

See a catalogue of the Ben Kelly paintings in this exhibition at Brian Sinfield Gallery HERE.

The new #Cotswolds2020
Wonderful Burleigh Court in the Cotswolds

When the good people at The Chipping Norton Tea-Set went into lockdown along with the rest of the Wo....

The Coronavirus crisis is making it a time of uncertainty in the Cotswolds and everywhere. ....

Get two seats at the table at this month's Gluts & Gluttony Supper Club.  Super Ch....