Fun at the Soul Circus

If anyone said to me just one year ago I’d be spending a precious Friday off work tying myself up in knots at a yoga festival I’m pretty certain I’d have questioned their sanity! And yet – here I was – loving everything about the first ever ‘Soul Circus’ three day yoga and wellness festival. 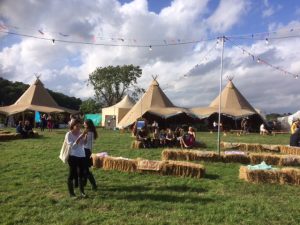 Picture the scene. A spectacularly wet August Friday in a remote Gloucestershire field; a circle of tents and tipis straight out of a Sunday afternoon Wild West film and a whole host of yoga enthusiasts, young and – in my case – not so young, relishing the experiences ahead!

The incredibly friendly and welcoming staff went out of their way to put everyone at their ease and even the torrential rain couldn’t dampen the enthusiasm of my fellow yogis, looking forward to three days of classes in every discipline imaginable – from aerial yoga in large hammocks to Pranayama and Vinyasa in the Hot Tipi and Shakti Power Medative Flow in the Experience Tipi among so many other classes to choose from.

I’m a relatively new convert to yoga and admit that since starting classes in January I’ve become just a little bit obsessed with the amazing things it’s done to my body! I not only feel stronger but I’m walking taller – aching a little less in the morning – and have become something of an evangelist about the practice. 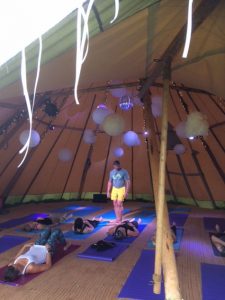 Even so I was sceptical about whether I’d enjoy quite such an intensive yoga experience! Within minutes though the sun had come out and my festival adventure began with an amazing Liz Earle facial from the wonderful Sarah Carr, followed by one of the best vegan salads I’ve ever tasted.

Fully fuelled up and relaxed I hit the main tent for a Heart Opening Anusara session – a challenging class I wouldn’t even have attempted six months ago. Then it was onto the comfiest bean bags ever invented to chill in the sunshine and soak up music from Kerry Ann Jangle and the Lounge Cat Ideals with a cheeky gin and tonic from the fabulous Cotswolds Distillery before marvelling at the tales of Tom Perkins who spent 501 days cycling from London to Capetown, collecting recipes and stores along the way.

I would love to have had more time to spend at this lovely, happy and inspiring event. There was so much I missed out on – from wellness talks to art classes, cooking workshops to massage master classes. I wish I’d been able to ‘Shake my Asana’ or attend the ‘yoga in the womb of dub party’ among many other intriguingly named events. But after a day of feeding my body and soul, real life beckoned and despite a sceptical start, I can only hope Soul Circus becomes an annual event and many more people get the chance to experience this wonderful festival.

Afternoon Tea and Rococo in Painswick

Afternoon Tea and Rococo in Painswick

Just back from a most wonderful dinner at Wild Thyme in Chipping Norton, we're excited to share our ....

The opening of The Tea Set in Broadway

We're just back from the wonderful opening of the loveliest new tea room in the Cotswolds, The Tea S....

The Garden Room’s taster menu… a culinary event to remember

It’s Friday night and I’m at Dormy House with my lovely friend, Sarah, a fellow foodie and the p....